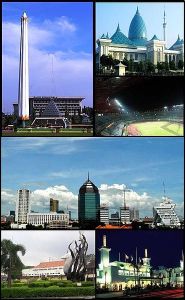 I The city of Surabaya. Pictures from Wikipedia Commons

Being Freshly Pressed  filled my inbox for a few days, made me privy to fascinating debates about voting rights, and gave me a great ego trip.  And, I came across a few people with whom I have a heck of a lot in common with and many who are wonderful writers.

Even better, I was downright fascinated with the ability to participate in a pretty civil discourse with people from at least 13 countries, especially given that my post was somewhat political in nature.

In the past three days I’ve had over 300 views per day, with 363 just yesterday. That is crazy.  But very cool.

One fellow blogger who liked my “Register to Vote” post lived in Surabaya and their blog was available in Malay or English.  I didn’t recognize Surabaya as a place or Malay as a language, so after a quick Google search, I learned that Surabaya is Indonesia’s second-largest city with a population of over 2.7 million (5.6 million in the metropolitan area), and the capital of the province of East Java. It is located on the northern shore of eastern Java at the mouth of the Mas River and along the edge of the Madura Strait. It turns out that Malay is the national language of Indonesia, Malaysia and Brunei, and it is one of four official languages of Singapore

I also learned that Indonesia is the fourth most populous nation in the world. And the number of people who speak Indonesian fluently there is quickly approaching 100%, making Indonesian, and thus Malay, one of the most widely spoken languages in the world.

Okay, enough with the geography lesson.  But it is fascinating.

In the end, I enjoyed participating in a conversation with so many interesting people from so many countries across the world.  Who would have thought that could happen so easily?  I sure didn’t.  And for that I am grateful.