The intermission bell chimed.  My heart raced.  There I was.  In my perfectly refined Ann Taylor get-up for the theater, with pearls and heels on to boot. I had moments left to get a beverage with as much caffeine as humanly possible and return to my seat.  The line I had chosen  at the intermission bar had been moving painfully slow. (Why do I always pick the slowest line?)

I quickly scanned the drink list signage for a coffee beverage.  No, no… it couldn’t be.  Surely they have coffee, surely they do.  It was a semi code blue situation.  I needed caffeine and I needed it stat, like in an intravenous kind of way. Otherwise I was simply not going to make it through the second act.

Before I realized there were no coffee options available I saw a clear countertop refrigerator full of tall, silver, red and blue Red Bull cans.  Who in the world would drink Red Bull at the theater, I thought to myself almost laughing at the irony as I scanned for a coffee pot anywhere in sight.  Red Bull at the theater just seemed wrong.

But I had been dozing in and out of consciousness  (like my Grandmother did in Star Wars I when I was little for God’s sake) throughout the entire first act of a wonderful live performance.  I was with two girlfriends the other night, one of whom was nice enough to invite me and let me use her spare second row, center ticket to see Peter and the Starcatcher – a wonderful show with an uber talented (and handsome I might add) cast, a great story line, a terrific script and wonderful stagecraft.  Who could possibly fall asleep on the SECOND row where I could clearly see the spit coming out of the actors mouths when they spoke?  Grandma Johnson… and me apparently. 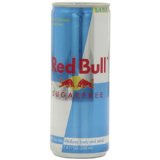 I’m almost positive that I caught each one of my friends glancing my way at different times during my short, startled awake spurts and noticing me fighting to stay awake.  Or maybe I dreamt that. I was playing it cool, and told myself that I probably wasn’t drooling or making snortish, gargling snore sounds each time I woke up, so they probably didn’t notice.  And hopefully I didn’t lay my head on the shoulder of the random woman to my right (did that on a plane once).

I had no choice.  As I reached the bartender stand, my fears of no coffee were confirmed.   The Red Bulls on those cans stared me squarely in the eyes with little smirks on their faces.  So I quietly ordered a Red Bull.  “Sugar free or regular?” the gal asked.  I didn’t know there were different versions and didn’t care.  I murmured to her that I would take the sugar free Red Bull and a water as I handed her cash like I was making a drug deal.  She gave me a little cup with a lid (luckily no sharpie) and explained to me that under no circumstances could I open the big can before I was sitting down in my  theater seat since such a massive vessel of caffeine would not all fit in that little cup. ( I assume this was so that it wouldn’t spill all the way down the stairs to my seat, which was smart on her part considering she didn’t even know my history of similar episodes. )  She almost made me pinky swear that I completely understood her as she looked at me sternly to confirm my acceptance of this rule.

But there was no way in hell I was going to carry a huge, obnoxious Red Bull can into that theater and pop open the can just as the show was about to re-start.  I would have had to scratch my crotch afterwards or something. Plus, it didn’t go with my great outfit and pearls, or the ambiance of the entire evening.  Kind of like when you see a bride in a beautiful wedding gown holding a Bud Light.

But I was desperate.  I needed a hit.

The bell chimed again.  I quickly scurried over to a corner behind a column where the bartender gal couldn’t see me and poured a third of the can into my little lidded cup.   I quickly swigged some of it down and did a quick refill.   All I needed to complete this class-act picture was a cigarette package rolled up at the top of my Ann Taylor sleeve and a chain wallet hooked to the belt loop of my cute leopard capri pants.

That would have to do.  I took a deep breath and stretched my eye sockets as widely as I could and headed back in.

Luckily the caffeine hit my bloodstream quickly as I’m sure Red Bull is intended and I was able to thoroughly enjoy the second act.  I blame my exhaustion on a crazy work week, a first week of school for the kids with tons of forms to sign and hellish school supply shopping trips, that face punch gal incident way earlier that same morning and a little bit of that wine headache that might have been still lingering.  I was a zombie, but in a cute leopard capri pants.

Desperate times called for desperate measures.  and luckily it worked.

The best part?  I don’t even think I drooled on anyone during the second act.

18 thoughts on “What I did at the theater while no one was watching.”